The NZ National Tour is done for the year, the Matchplay Champs are over, and the national titles for the year have been awarded. However, they don’t tell the entire story of NZ disc golf in 2017, and several players deserve special mention, and a prize for their efforts. Vortica Disc Golf is awarding a $25 website gift voucher to our top picks for 2018, and beyond.

On top of this, the national titles only tell a tiny part of the story of the NZ Tour in 2017. We don’t have the space or time to tell all the truly great stories, but we do have time to analyse the tour results, and declare our Players Of The Year Who Didn’t Get National Awards, so here goes!

Vortica Disc Golf’s Chucking Themselves Into It Award

This year Hayley took the Women's Matchplay title, in a thrilling playoff against Paula Wilson, taking the final playoff hole in style, parking #17, a basket the vast majority of the men struggled to birdie.

“Hayles” also had time to go to the UK to help NZ take third in the World Teams event, then took out the Belgian Open, beating another player very familiar to us, Alessa Schwarz from Germany, for the win.

Also competing in her first World Championships in Columbus, Georgia in the USA, Hayley now has 11 career wins chalked up at the PDGA. She was one of only three NZ players to cash in professional events in 2017. Massive shout out to our very own Hayley!

Although it should not be that surprising, as partner to NZ’s Open Tour Champion, Jackson Sullivan, we feel compelled to acknowledge Paula’s massive improvement in 2016 and again in 2017, pushing Hayley to the limit at the Matchplay this year, and also her dedication to the tour, competing in a huge 10 events for the year.

Keep an eye out for Paula on the 2018 tour, as her form has progressed significantly, and she has become a truly formidable opponent. Long may you continue to improve, Paula!

The Botha clan seem to have the DiscGolfGenetm, if such a thing exists. And clan-mother Lorenne is on the verge of a huge breakthrough as she introduces an x-step into her game. By far NZ’s most powerful female player throwing from a stand-still, Lorenne is set to blow past 100 metres in 2018, and the two ladies above should breathe a huge sigh of relief, as Lorenne will be in the Women’s Masters? division for the tour in 2018.

Huge props to Lorenne for her achievements this year. Put it in the basket, Lorenne!

Son of Vortica’s friend, Queenstown’s Akira Kuroe, and aged just 9, Haru has really shown us his stuff this year, and he greatly impressed us with his incredible maturity, amazing array of shots, and his deadly accuracy. Playing in his group at the Tucker Beach Rush, Haru actually beat Chris on a difficult hole!

If we ignore Phil Botha, who played in the Open Division, Haru is our National Tour Junior Champion for 2017, and he was in an epic struggle with young Calieb Tyler for the victory, with the boys ending up in 178th and 179th place on the tour, and separated by less than half a point. Now that’s close!

We expect to be telling you a lot more about Haru in the future. Nice One, Haru. Keep it up for 2018!

Tomas arrived in Christchurch from the Czech Republic and started playing disc golf in 2016 and played 2 tour events, ending up 94th. In 2017 he played 7 events, and made it into 15th place on the tour – a major achievement.

Getting into the top 16 is no mean feat, and to do it in such a short time is phenomenal. Tomas has a powerful backhand, and this year has developed a fierce forehand, and he took his first National Tour Event win at the Christchurch Fling, denying yours truly his first outright win since 1997. He then proceeded to take 3rd overall at the Lords Of Lismore, and added 31 points to his PDGA rating since January (now 921), and managed his best round at PCM5 with a rating of 987 in round 2.

We’re confident Tomas will improve again in 2018, and be a force to be reckoned with at the pointy end of the tour. Get on it hard, Tomas!

This year “Gilchy” once again just missed out on a spot in the coveted “Top 16”, with 17th place, backing up his 2015 tour results, when he was 18th overall. As well as winning the Advanced division at the NZDG Nationals 2017 in Paradise, Stuart made a 6th and 7th and two 11ths on the tour, showing his consistency and gradual but relentless improvement over the last 3 years.

Vortica advises you to keep an eye on this Queenstown man in 2018, for a Top-16 Matchplay slot in December.

Although our good buddy Bob didn’t get to play much golf on tour this year, due to injuries and various body parts going bionic, and moving house to Takapuna, he did something we want to recognise as truly selfless and something NZ disc golfers will have great cause to thank him for in the future.

In over 40 years of playing disc golf all over the world, Bob amassed a truly astounding collection of discs, from the Frisbie Pie tin, to a Pluto Platter still in the plastic wrapper. It is unknown what plans NZDG have for them, but to donate a huge collection which is probably worth $10,000 or more is something that should not go unreported. Have a disc on us, Bob!

Something from Mart about Chris.

I’d now like to mention Chris Davies (my business partner) who did make a bit of a splash on the tour this year. He competed all year long in the GM division, took two overall second places, one third place, and placed fifth three times. Although he played in eight NT events, and took seven divisional wins and a fourth place, he was not awarded the Grand Masters Tour Champion title, as it was given to NZ’s top Open player, Simon Feasey, who was denied his Open title due to turning 50 this year, despite competing in Open all year long.

Chris also managed ninth on the National Tour – the second time he has done that in three years.

So I’d just like to say, Well done Chris!… pretty damn solid performance for an old fella You continue to compete strongly in your division and overall. I appreciate your continued passion for our great sport. I’d like to say have a disc on us but he's probably already well sorted in that respect:-) 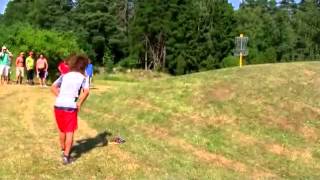